Altra Chaga "The Gift from God"

Next product
Altra Chaga "The Gift from God" 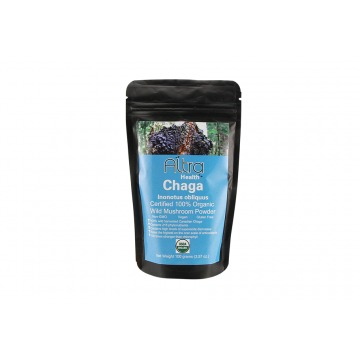 Chaga (Inonotus obliquus), also named 'The gift from god', is a type of fungus which only grows on the birch trees in Canada, Siberia and other cold regions.
Chaga has been used for centuries to treat such ailments as cancer, gastritis and ulcers as well as bone disorders. Modern scientific studies suggest that this belief in the healthful properties of Chaga was not misplaced. 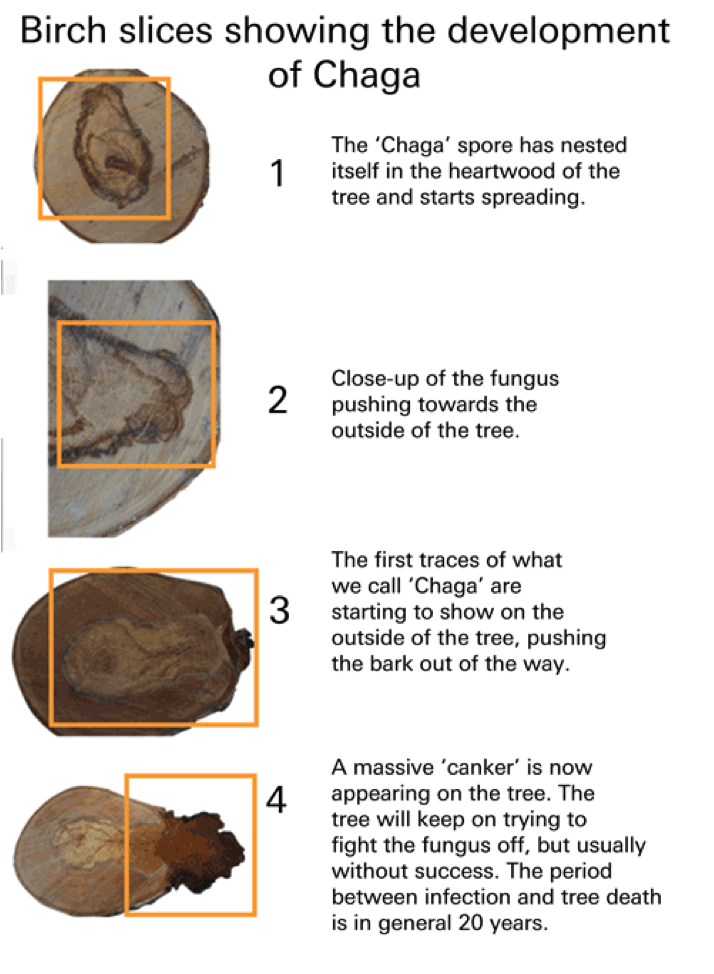 What we call 'Chaga' is the dense black mass (25-40 cm large) that can be seen on the outside of trees (almost exclusively birches) infected with the fungus Inonotus obliquus. It is not a fruiting body (meant for spreading spores, the final stage in the life of many mushrooms) but a dense sterile mass of mycelia, with decayed bits of birch tissue incorporated. When chopped from the tree the interior has a rusty yellow-brown color, somewhat granular in appearance, and is often mottled with whitish or cream-colored veins. The hard, deeply cracked black outside of the Chaga is called the sclerotium.
Typically, well-developed Chaga sclerotia are found on trees over 40 years of age, but the infection starts earlier. The period from initial infection to tree death varies with the number of infection sites and tree resistance, but is typically around 20 years. After about 3-5 years the Chaga can be harvested. After harvesting, chaga can regrow to harvestable size again in three to ten years, and this can be repeated until the tree dies. Chopping off the Chaga does not stop the infection.

Northern Canadian forest is one of the best places to grow wild Chaga. Chaga grows in wild forest areas here with no pollution (secluded; far from the hustle and bustle), and harvested sustainably from larger mature living Birch trees, ensuring organically certified and wild crafted.
The Chaga obtains further medicinal power due to the harshness of the environment in which it grows. Therefore, Chaga found in the northern Canadian forest would contain more medicinal value than Chaga growing at lower latitudes.

The major functions include below but not limited to

Chaga has been approved as a treatment for various types of cancer. The betulinic acid found in Chaga mushrooms is known to induce apoptosis or cell death and prevent tumors from developing. A number of research articles have confirmed that Chaga has exciting anti-tumor potential. [1-2]
Another study has demonstrated that inotodiol; the triterpenoid compound found in chaga has potential as an anticancer agent. Researchers concluded that these sub fractions isolated from chaga had the potential to be used in food or by the pharmaceutical industry as an anticancer ingredient. [3]
A recent study looked at another compound from Chaga mushroom and its anti-cancer potential. The study tested the anti-cancer activity of Ergosterol peroxide from Chaga mushroom on mice. Ergosterol peroxide was shown to inhibit colorectal cancer in mice. The extract inhibited cancer cell and tumor growth. Authors concluded that the Chaga extract has properties to advocate its use as a supplement for preventing colon cancer. [4]
Research suggests that Chaga may contain multiple anti-cancer components: Betulinic acid, Inotodiol and Ergosterol peroxide.

Chaga is understood to be an adaptogen simultaneously working in two directions to helps boost and modulate the immune system. Many experts consider it to be one of the most potent natural foods for autoimmune diseases. [5]

Chaga can help normalize and balance blood sugar level. Research has demonstrated that polysaccharides-chromium (III) complex, Terpenoid and sterol compounds appeared to be the major active constituents of Chaga. [6-7]

In the Oxygen Radical Absorbance Capacity (ORAC) scale, a scale which was designed to measure the ability of food to deal with oxidative stress and absorb free radical damage, Chaga has the highest rating. It has up to 50 times anti-oxidation capability than CoQ10, Vitamin C, blueberries, fish oils, truffles and seaweed. Chaga's incredible ability to combat oxidative stress makes it a powerful ally in the fight against aging, heart disease and cancer. [8]

As well as protecting the heart by its antioxidant and anti-inflammatory nature, the betulinic acid in chaga is known to help break down the bad LDL cholesterol in the body. Research discovered that Chaga had a beneficial effect on high blood pressure as well. [9]

The main active ingredients in Chaga such as betulinic acid and inotodiol work to reduce dangerous inflammation within the body. Inflammation can be extremely harmful and left unchecked might lead to serious conditions like heart disease, stroke, high blood pressure and rheumatoid arthritis. [10]

Because of its immune boosting and anti-inflammatory abilities, Chaga has traditionally been used to support intestinal health and treat ulcers. According to research, Chaga might be a useful alternative treatment for ulcers and inflammatory bowel syndrome. [11]

Chaga Side Effects and Considerations

Chaga might in theory interact with certain medications like anticoagulants and also diabetes medications like insulin. Therefore. Chaga might cause hypoglycemia occurs when blood-sugar levels drop too low, or rise bleeding risk when you use aspirin or warfarin. 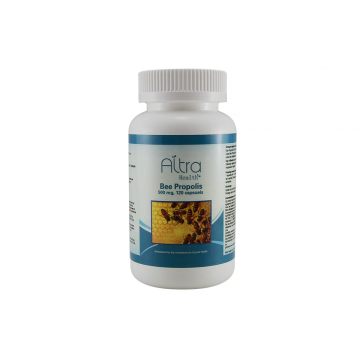 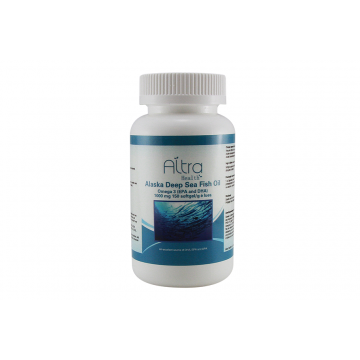 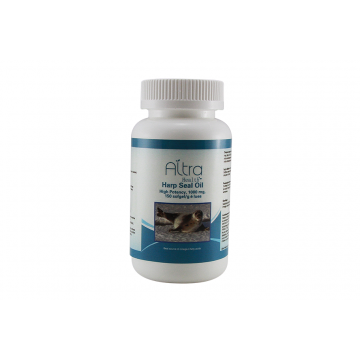 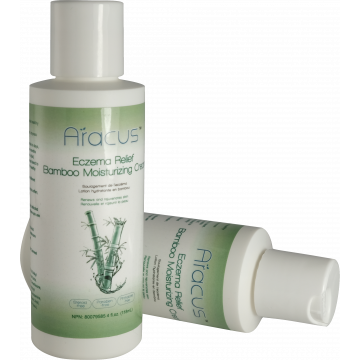 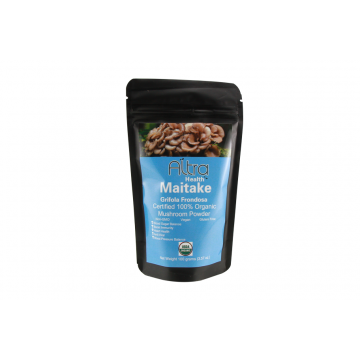 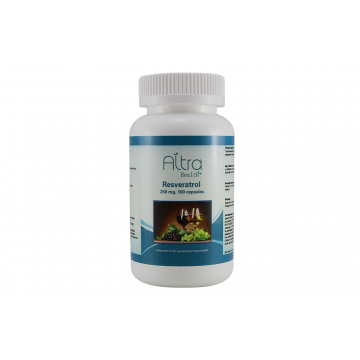 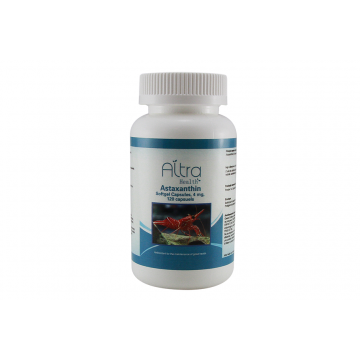 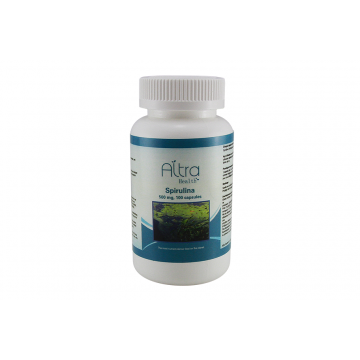 Thank You for Subscription!